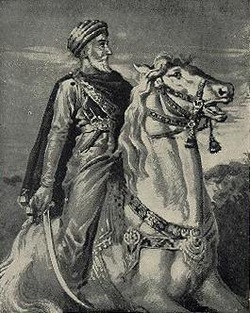 Artist's rendering of Hassan-i Sabbah
The Assassin Brotherhood was created by Hassan-i  Sabbah, a well known and respected man who used his popularity to recruit members for the order in 1080. Sabbah and the Assassins took refuge in what is currently northeastern Iran, but at the time was called Alamut. Sabbah seized Alamut in 1090, and the Assassins sheltered themselves from the rest of the world. While the Assassins would go about their duties and assignments outside the fortress, Sabbah never again left in his lifetime, preferring to stay inside the fort and create doctrines for the order.

The Assassins were to follow their targets and were masters of disguise, sneaking into the territories of their enemies to carry out their assassinations. They manage to get past guards, blending in as ordinary people. Demonstrating yet another tenet, they often hid in plain sight. This required extensive knowledge concerning their enemies, who were being studied intently in secret by the Assassin(s) tasked with killing them.

Hassan-i Sabbah was born to an Arab family in 1050 somewhere near what is now modern day Iran, in a city called Qom. From the age of 7 to the age of 17 he studied and mastered palmistry, languages, philosophy, astronomy and mathematics. Upon turning 17, he swore allegiance to the Fatimid Caliph and from there on went about traveling, with Cairo, Egypt as his destination. During his journey he was in a shipwreck and was briefly imprisoned. After this he began to search for a base, so to speak, which would be the home of his operations. Between capturing the fort and recruiting what would soon be known as Assassins to help him in this effort, the process of capturing Alamut took about two years. After that, he was completely and absolutely dedicating to furthering his knowledge, studying and mastering subjects such as alchemy, medicine, architecture, and other sciences. After building his order he stayed inside Alamut for 35 years, leaving only twice to visit the roof. He died at the age of 74 on 12 June 1124 in Alamut.

Not much is known about Kiya Buzurg Ummid. He was a Persian scholar whose date of birth is currently unknown. The day before Hassan-i Sabbah's passing, Sabbah appointed him his successor, and Ummid went on to become the second lord of Alamut. He died in February 1138, and allegedly was buried in Alamut next to Sabbah.

Mohammad Kia Bozorg succeeded his father, Kiya Buzurg Ummid, in 1138 after his death. He passed away due to illness in 1162.

Most commonly referred to as Hassan II, Hasan was only thirty five when he succeeded Mohammad Kia Bozorg as Alamut's Grand Master Assassin in 1162. His leadership lasted for four years, and he died a 'violent' death in 1192.

Rashid ad-Din Sinan was born in Basra, Iraq in the the twelfth century. He was trained by the Assassins since his youth in Alamut. He became the Assassin Grand Master of Masyaf sometime in the 1160s. During his leadership, he was able to keep his enemy, Sultan Saladin, from laying siege to Masyaf. This ended in Saladin, terrified, offering a truce between them, after having survived two assassination attempts.  In 1911, Sinan ordered Conrad of Montferrat's assassination. Sinan died a year later in Al-Kahf Castle. 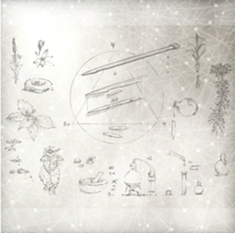 One popular weapon chosen by the Assassins was a dagger dipped in poison. This is also an optional weapon in Assassin’s Creed II and Assassin’s Creed: Revelations. In the game, the weapon is depicted as a blade with a thin, hollow needle inside that could be used to carry poison. One of the features of this weapon in the game is that the poison takes several minutes to take effect, giving the player ample time to escape the scene to lower suspicion and avoid conflict. Although this is not mentioned in the historical literature written about the Assassins, this feature (delayed intoxication) would prove quite useful to them.

Despite their name, the Assassins would not always kill their targets, rather choosing to threaten them into cooperation. This could be done either by a dagger or leaving a threatening note on their pillow. As the Brotherhood was feared, these threats were taken seriously. The assassinations would take place in public areas in the daylight, earning the Assassins their reputation.

The Downfall of the Assassins

In 1253 the Mongol Empire, angry upon learning the Assassins had assassinated their leader Mongke Khan, assaulted several of the Assassin’s fortresses. The Brotherhood lost control of Alamut in 1256, regaining Alamut for a few months in 1275 before being slayed by the Mongols, ending what was left of the Order. In Syria however, the remaining Assassins were put to use by their captors, the Mamluk Sultan Baibars, in 1273. However, Assassins may have formed small groups to carry on their work, or even proceeded accepting private assassination contracts, until the 14th or 15th century. There are no records of Assassin activity afterwards.