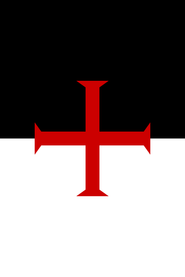 One of the Templars' flags.
The Templars were established officially in 1129. They had different names, including Knights Templar, the Order of the Temple, or simply Templars. They were "among the most wealthy and powerful of the western christian military orders." This organization lasted for approximately two hundred years, the same amount of time the Assassins existed. They bought  castles, farms, large plots of land, churches, vineyards, a fleet of ships, and even the island of Cyprus.
The Templars were not only extremely skilled in combat, but in finance as well. It is interesting to note that while the majority of those in the Templar Order were impoverished, the Order itself was given large sums of money. While the Templars' goal was to be charitable to those in need, they also worked towards economic gain as well.
The Templars were accused of and charged with apostasy, idolatry, heresy, obscene rituals and homosexuality, financial corruption, fraud, and secrecy.
King Phillip IV of France, who was heavily indebted to the Templars, took advantage of his knowledge of the Templar secret initiation ceremony. As a result, many members of the Order in France were arrested, tortured, and burned at the stake in 1307. The Order was demobilized in 1312. 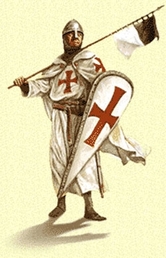 As in the Assassin Order, the Templars were given ranks. The highest rank was Grand Master, a position one kept for life. The first Grand Master was founder Hugues de Payens. Below him were three lower ranks. First, the noble knights. The  Templars did not perform knighting ceremonies, so any knight wishing to become a Knight Templar had to already be a knight. They would battle with three or four horses. The second highest achievable rank was the non-noble sergeants, most of which were blacksmiths and builders. Those two skills proved to be very useful for the Templars, who required extensive use of both. They would fight alongside the knights with one horse per individual. The lowest rank was that of the chaplains, priests who cared for the spiritual needs of the Templar members. Although all wore the red cross, which was the Templars' insignia, their outerwear was different depending on their ranks. The Knight Templars were
equipped with prestigious white mantles, whilst the non-noble sergeants wore
black or brown.

Just as the Assassins had their creed, and the pirates had their code, the Templars had a guideline called the Latin Rule. Several of the categories in which the rules have been placed are as follows:
The Templars were given instruction in every aspect of their lives. The rules imply they are to have no connections to women or bear children, as well as proclaiming hunting a forbidden sport. Also, although they were viewed to the public as a Christian group, practices such as black magic, rites, and sermons were said to be common, which may or may not have been in contradiction of their Latin Rule. 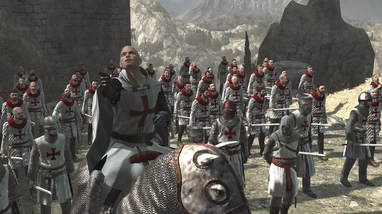 Rodrigo and Cesare arguing in ACB
Known more commonly as Pope Alexander VI, Rodrigo Borgia (born Roderic Llançol i de Borja) was born January 1st, 1431 in Spain. He was head of the Catholic church from the 11th of August 1492 to his death on the 18th of August, 1503. While some say he died of malaria, others say he was poisoned by his son Cesare.

Fun Fact: in Assassin's Creed: Brotherhood, Rodrigo Borgia is poisoned (and ultimately, killed) by his son, Cesare, after he learns of his plans to assassinate him.